Brexit is still paralysing government and parliament. But I think a significant corner has been turned with the decision of the European Council to extend the timetable for Brexit until Halloween on Oct 31st.

The sense of drama and crisis has abated somewhat, now that Brexit Day is no longer imminent.

If parliament has achieved one thing in the last few, messy, weeks when it ‘took back control’ from the government it has been to dampen the fear (and hope for some) of suddenly crashing out from the EU without an agreement. I was told by those who where there that at the 7 hour marathon cabinet meeting last week, the briefing by the Cabinet Secretary, Sir Mark Sedwill, on the consequences of such an outcome, killed off whatever lingering possibility that Theresa May may take us down that road and over the cliff.

I think Theresa May handed Jeremy Corbyn a whole lot of votes.

The fact that parliament had been absolutely clear on that point, if nothing else, had created the political environment in which she had little choice but to abandon the threat (albeit after spending hundreds of millions of tax payers money, in parallel with a large amount of business spending on a hypothetical possibility which some of us thought from the outset was widely implausible.)

Mr Corbyn may surprise us by signing up to a ‘soft Brexit’ agreement, but I doubt it. He will have been well satisfied to have had an opportunity to change the public perception of him away from revolutionary socialism, unilateral disarmament and anti-Semitism, towards business-like conversations about government.

I think Theresa May has handed him a whole lot of votes, which is why her own party is incandescent with fury.

An extension of the Brexit process until October will change the political dynamic.

The sense of immediacy, inevitability and energy around Brexit will fade. There will be a lot of quiet rethinking: is this what we really want? If this deadline can slip, why not the next one? Maybe we should be getting down seriously to some of the other issues which have been put on ice: social care, homelessness, violent crime? My booklet Beyond Brexit is intended to provide an agenda for that world.

However, there are two events which will keep Brexit in the headlines however much we would pray otherwise.

The first is the timetable for European Parliament elections. This is excruciatingly embarrassing for the Conservatives whose Brexit government has let this happen and is bitterly divided to boot. They must fear an upsurge of support for Nigel Farage’s Brexit party and would be right to do so.

The Labour Party is also badly divided and stands to lose ground to both Remainer and Brexiter competition. This is undoubtedly an opportunity for my party. One cloud on the horizon is the fact that the several Remain parties may weaken each other. Remain campaigners will expect a common front against Farage and I am prepared to work with other parties to achieve that; so far the feedback from other parties has been discouraging. But whatever the formation Lib Dems should still do well.

I want to see a serious election with televised leaders’ debates to focus the arguments.

I attended an enthusiastic People’s Vote rally in Church House earlier this week. The sense that a People’s Vote is just within reach is now palpable, reinforced by the signs that those were previously sceptical are now coming round.

The next big political event will, however, not be a European election, or a referendum, but local council elections. Last Saturday I went to Somerset to launch the Lib Dem campaign in Bath.

Bath is a booming city with two universities, lots of foreign visitors, high tech start-ups and house prices to match. It is strongly remain and our MP, Wera Hobhouse, has mobilised hundreds of volunteers behind an anti-Brexit, pro EU, campaign. The local campaign for council seats dovetailed closely with the People’s Vote.

The next big political event will be local council elections.

Politically we have a longstanding Lib Dem council in South Somerset which is well regarded, very competent and has enlightened initiatives like a new hostel for homeless families which I visited. No Brexit campaigning, but bread and butter local politics (and the fond memory of Paddy Ashdown, the former Lib Dem leader).

In the frenetic atmosphere last week, I was in more need than ever of a good book to sink into late at night.

I found one: Shari Lapena’s The Couple Next Door. I was initially off put by the blurb which has no pretensions to literary distinction beyond a recommendation from the Daily Mail. But I am glad I bought what is a superior thriller: brilliantly crafted; tightly written; absolutely gripping; really clever.

As someone who has tried to write a thriller (Open Arms is doing well but isn’t a best seller!) I was full of admiration for the author’s skill in turning the whole direction of the plot in a short phrase; and the ability to pile on surprise after surprise without ever being implausible. A great read: but it does go quickly . 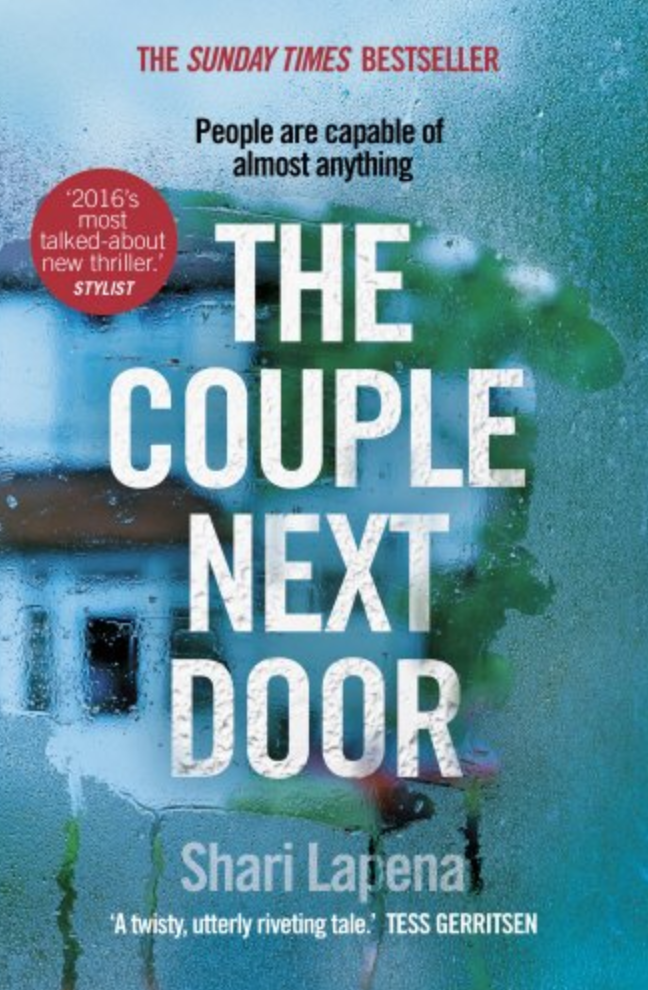