Nonetheless, it is one of the frustrations of leading a relatively small (if high quality) group in the House of Commons that we sometimes struggle to get the media coverage we deserve. Likewise PMQs, where I am called only once a month despite our party having secured more than double the vote of the SNP, whose leader is called twice a week!

However, this has been a good week for Lib Dem media coverage.

I must have done 20 Questions Times over the last two decades. It is a difficult format: trying to engage with an unpredictable live audience; trying to debate with fellow politicians, some of whom won’t stop talking or talk over the other panellists; trying to think about the visual and overall impact on the audience back home; trying to catch the eye of David Dimbleby, now Fiona Bruce; trying to answer the question while remembering the lines you had remembered in case a similar question came up.

I always come away anxious and deflated, worrying about the missed opportunities, until the texts come in in the car on the way home saying it was fine. 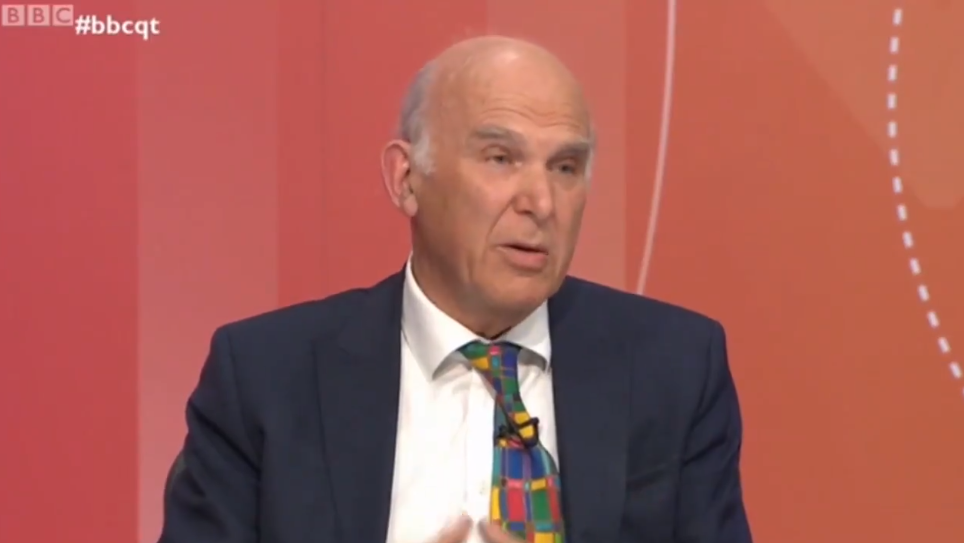 Last week’s QT at Nottingham University was a new experience.

I happen to be a visiting professor (of economics) and know the campus well. It is one of the most beautiful in the UK and the University is thriving. I expected a polite audience of academics; maybe a few radical students.

I couldn’t have been more wrong.

It was quite the noisiest and most aggressive audience I have encountered; mention of the word ‘Brexit’ almost caused a riot. Fiona is an intelligent chair but appeared overwhelmed at times. Fuel was thrown on the fire by the maverick non-politician, actor John Rhys-Davies. Having shared a panel with Jeremy Clarkson and David Starkey I have seen how the mavericks can dominate. But Rhys-Davies hit a raw nerve: the people had been ‘betrayed’ by the politicians. An eruption followed.

I did get a chance to drop into the exchanges that I had declined to join President Trump at a Buckingham Palace banquet during Trump’s June state visit. Jeremy Corbyn has followed suit. I achieved some notoriety a decade ago when I was acting party leader by turning down a similar invite to sup with the King of Saudi Arabia. There was outrage from some of my more conservative colleagues who said it was a snub to the Queen (which it wasn’t). But I thought it was important to make a statement about the practice of governments inviting tyrants and human rights abusers (Mobutu; Ceausescu; Mugabe) to enjoy the hospitality of the Queen and the trappings of royal events.

Our government has to do business with Trump. But only very few Presidents have enjoyed the honour of a state visit. Why Trump?

Saudi Arabia was (and is) a commercial priority for the UK but its mediaeval barbarism should invite caution over the extent to which we roll out the red carpet. Fast forward ten years and last week’s mass execution, after torture, of peaceful protestors in Saudi, including juveniles, confirms my original instinct that this is a ‘friend and ally’ of the UK we should distance ourselves from.

The President of the USA isn’t mediaeval. And clearly our government has to do business with Trump given that the US is a key military ally and trade partner. Butonly a very few US Presidents have enjoyed the honour and pomp of a state visit. Why Trump?

Over and above his frequent offensive comments and actions insulting women and indulging racism, he has pursued policies directly contrary to British interests: embraced economic nationalism and trade warfare (with China and the EU) which undermines ‘open Britain’; sabotaged the global Climate Change Agreement which the UK set great store by; tore up the nuclear non-proliferation agreement with Iran; insulted our intelligence services with ludicrous claims that they are spying on him; cultivated the Putin regime in Russia, undermining our security and undermining NATO.

His fans say he will deliver a ‘trade deal’ with the USA. Leaving aside the fact that such a deal would be in the interests of ‘America First’, not the UK, and involve a serious dilution of our food standards, a ‘trade deal’ is not in Trump’s gift; it has to be approved by a potentially hostile Congress.

That he is a powerful and important figure (even if he is unpleasant and a crook) is not in dispute. That Americans have voted for him is not in dispute. But we can surely do business without the kind of sycophancy Theresa May and her ministers have lavished on him.

Tomorrow and Friday, I hope we can look forward to another rainfall of good coverage with the local election results. We got 75 net gains last year and won several councils including mine in Richmond – the best result for 10 years – but we were neck and neck with Labour in seats and the success didn’t quite translate into a big bounce of popular support. This year we aim to do even better, getting well into triple figures with our gains.

In the process of local campaigning I have managed to cover a fair bit of England (no elections in Wales and Scotland).

Politics apart, it is good to get out of the London bubble and Brexit-obsessed Westminster; to meet local activists who normally never get to see the top brass; and to connect with real life problems (proud and inspirational but financially struggling schools; hostels for the mounting number of homeless; villages without bus services; local businesses paralysed by chronic uncertainty; but, also, lots of dedicated, optimistic, idealistic professionals and volunteers.

My various expeditions over the past several weeks have taken me to South Lakeland, Greater Manchester, Leeds and York in the North; Bath, Yeovil, N and S Devon, Torbay in the South West; N Norfolk, Cambridge, Peterborough, Chelmsford, Bedford, Colchester in the East; Hinkley and Oadby (Leicestershire) in the Midlands; Oxford (Vale of White Horse), Winchester, New Forest, St Albans, Watford, Spelthorne in the South and South East.

Just this week I have been to the Cotswolds, Three Rivers, and Mole Valley. It is possible that I and the activists I have met are delusional fantasists – being a Liberal Democrat requires a measure of optimism – but the message I get almost everywhere is that our old, for a time discredited, slogan ‘winning here’ now has real substance again.

The recent political excitement has curbed my reading. But over Easter I discovered a remarkable book called The Great Leveler by Walter Scheidel.

It is a work of extraordinary scholarship measuring and analysing inequality going back to the Stone Age but meticulously compiling data on the distribution of the ownership of wealth going back through the Assyrian, Egyptian and Roman empires; Chinese dynasties and the upheavals of the Middle Ages. His conclusion is deeply gloomy. Societies enjoy genuine equality only after plague (the Black Death; the conquest of Latin America), war (World War 2, the 100 Years War), revolution (the Soviet Union, China) or social collapse (the end of the Roman Empire; modern Somalia).