Last night, a leaflet for the European elections from the Labour party was published. Spot what’s missing: any reference to a People’s Vote.

It couldn’t be clearer. Labour’s decided its strategy for the EU elections will be warmed-up “constructive ambiguity”.

It’s 2017 all over again – they’ll tell Remainers they support giving them the final say. But in reality, they’re helping the Tories push Brexit through.

Jeremy Corbyn is ignoring the wishes of his MPs, party members and voters in pursuit of leaving the EU.

Hey, Corbyn, are you gonna push for a People’s Vote?

Remainers have lost trust in him. More and more people who voted Labour in 2017 are switching to the Lib Dems – because they know what we stand for.

A vote for the Lib Dems at the EU elections is a vote to stop Brexit.

We’ve been crystal clear since day 1 – Brexit, in whatever form it takes, harms our country. It harms our NHS, our economy and our union.

We were the only ones to call for a People’s Vote after the referendum and we’ve been fighting to give you the final say on Brexit ever since. 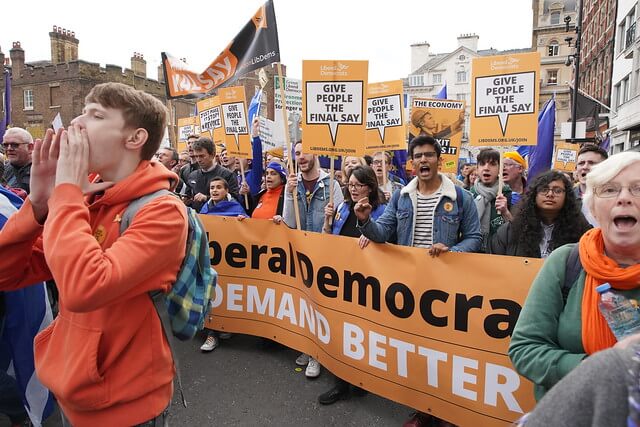 The best chance we’ve had yet of securing that will be a big Lib Dem victory at the European elections.

Every vote cast for us is a vote to stop Brexit.

Let’s tell Jeremy Corbyn it’s time to get off the fence. Vote to stop Brexit on the 23rd May: