The Liberal Democrat team on Shropshire Council is to ask councillors and officers to act urgently to help settle refugee families in our county. We are doing this because we do not believe that anyone, let alone a body with the expertise and resources of Shropshire Council, should stand idle while desperate refugees suffer and die as they flee war torn countries on the borders of Europe.

Our request comes in the form of a motion to the Shropshire Council meeting on 24 September. It will be proposed by Andy Boddington, councillor for Ludlow North, and seconded by Andrew Bannerman, councillor for Coton Hill and Quarry in Shrewsbury.

"We need to act quickly and flexibly. We are not suggesting that Shropshire takes in thousands of refugees. If we found homes for just ten families, that's ten families rescued from a state of crisis."

"Shropshire Council is a civic leader and has a lot of expertise. It should help shape our county's response to this emergency. This crisis is not going to go away any time soon. Shropshire Council must play its part, as must all of us."

"It is a natural instinct to think that it is someone else's responsibility to deal with a crisis. Other countries. Other organisations. Other people. But the reality is that it is everyone's duty to deal with extraordinary suffering like this. As just one council, one volunteer group or one individual we perhaps can't achieve a huge amount. But as hundreds of councils, thousands of volunteer groups and millions of people we can make a really big difference."

"That's why we will be asking Shropshire Council to back this motion at its next meeting. We are asking it to join councils, volunteer groups and individuals all over the country who are doing their bit to help refugees."

● it is the duty of the government and all councils to react to this humanitarian crisis by helping shelter families classified as refugees under 1951 Refugee Convention.

1. To recognise that it should join others in taking urgent action to help refugees.

2. To set up and empower a politically balanced group of councillors. This will work with the Housing Options team and external organisations to take action to help refugees find a home and settle in Shropshire.

3. To accept and discuss reports from the group at: the Cabinet meeting of 28 October 2015; Performance Scrutiny Committee; and full Council on 17 December 2015. The reports will state the group's progressing conclusions; the actions that it has taken or proposes to take; and the actions the council has taken or is recommended to take.

4. To instruct the Chief Executive to write to the county's MPs and the prime minister to remind them of the UK's moral responsibility to resettle many more refugees than currently proposed. The Chief Executive should seek guidance from the proposed group on the wording of his letter.

We'll be launching an online survey on at the beginning of next month. We – the four unitary councillors for Ludlow and Clee – would like to know your views about our town and the surrounding area. And we'd like your help in choosing the questions we are to ask.

Do you feel safe crossing the street? Are you worried about crime and antisocial behaviour? What about street lights, dog mess and litter? Do we do enough recycling? Or maybe you think everything is just fine.

What about the hospital? What do you think about the bus service?

What makes your life feel good? Or if it doesn't feel good, let us know what's up.

What we won't ask you is who you vote for. Or who should lead political parties. We certainly won't ask who should be the Conservative candidate for the next London Mayor. We won't even demand to know who you are.

We all need to work together in this time of escalating expenditure cuts, not fret over political allegiances. What we care about as unitary councillors is our local area and the growing problems we are facing as cuts bite harder.

Our anonymous survey will be designed to help keep us in touch and gather data that we can use to ensure that Ludlow's voice is heard. We don't have a final list of questions yet. If want particular topics covered, please let us know.

Our survey will be online from 1 September at teamludlow.uk.

Two Shropshire Lib Dem Councillors have expressed alarm over the effectiveness of superfast broadband cabinets is several rural localities after doubts expressed by contractors charged with putting them in.

Heather Kidd (Chirbury and Worthen) said: "We have been promised more broadband cabinets for a number of villages such as Clunton and Marton going live in 2017. In theory a cabinet should ensure that everyone within 1.2Km of the box should get Superfast broadband with its promised speed of up to 25mb. What we are now being told by the contractors on the ground is that this may be pointless unless we reroute telephone connections at the same time. This is because we would still be depending on the old copper wire from distant exchanges. Only last week a contractor working in Marton told residents that even when their cabinet goes live in 2017 most of the village won't be able to use Superfast broadband as phones in the village were directly connected to the exchange in Chirbury which still uses copper wire.

This episode begs the questions a) Why put a cabinet in Marton at all and b) If you are running fibre through a village like Marton wouldn't it make more economic sense to install a cabinet at the same time as the Chirbury one was put in??"

Cllr Nigel Hartin (Clun) added: "We have a similar situation in Clunton and a number of other settlements where Cabinets have been promised but there have been no guarantees that they associated infrastructure will be updated to allow the upgrade a significant difference. Residents and business owners have a right to know what will be delivered so that they can plan a future for their Broadband."

Digging back through my records, I find a note from August 2013. It was taken at the Shropshire Clinical Commissioning Group (CCG) meeting at Ludlow Racecourse. Many of you attended. One panel member – I regret not making a more accurate note of who it was – said that Ludlow Hospital could become a community health hospital that people work out of – "could just be an office". In other words, all the beds and specialist treatment provided on the site will go. This scenario may well come to pass.

We have seen the remaining two wards "merged" into one. There is no occupational therapy. There seems to be no will in the Community Health Trust, which runs the hospital, to recruit enough staff to provide the level of service we need in South Shropshire.

The bed closures and the shutting down of services is an ill omen for the chances of Ludlow becoming an Urgent Care Centre under Future Fit.

Future Fit is the project to remodel hospital health services in Shropshire. Its numbers don't stack up. There will never be enough money to run five Rural Urgent Care Centres if they are to meet the specification being proposed by the CCG. Just as there wasn't to enough money to create a new freestanding A&E between Shrewsbury and Telford.

Tracey Huffer and I have written about this today. We call for: "A more practical, flexible model which makes best use of existing resources and fully recognises the rural nature of much of this county." Joyce Brand has responded with a very thoughtful comment.

Dr Catherine Beanland has set up an online petition calling on the CCG to designate Ludlow Hospital as an Urgent Care Centre. Please sign if you have not already done so. 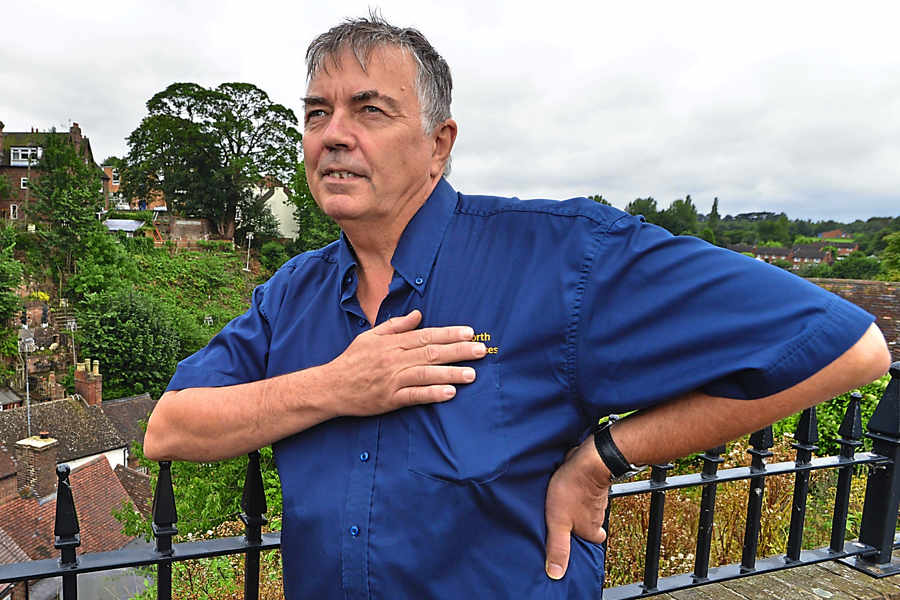 A Shropshire magistrate has resigned in protest at new rules that forces courts to impose extra fines for “petty crimes”.